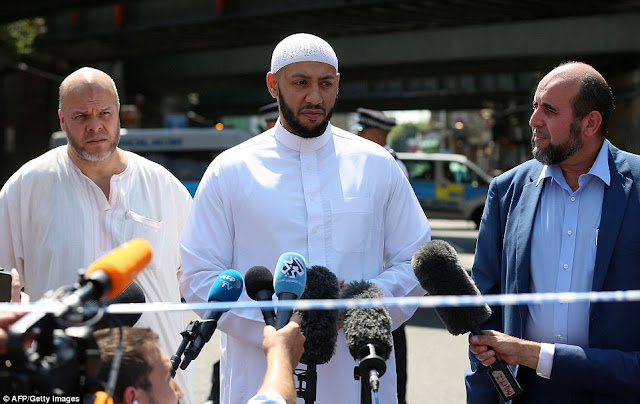 A TERROR suspect screaming “I’m going to kill all Muslims” has driven a rented van into worshippers leaving a mosque after late-night Ramadan prayers, leaving one person dead and injuring ten others.

The suspected attacker – a 48-year-old white man – ran down pedestrians before being pinned down by hero bystanders and arrested by police.

The suspect, who allegedly screamed: “I’m going to kill all Muslims”, was pinned down by hero bystanders

'By God's grace we managed to protect him': Hero imam describes moment he saved Finsbury Park terror suspect who was shouting 'kill me now' after 'ploughing into worshippers leaving a mosque'

London: At least one person was killed and several people injured in north London early on Monday when a van rammed into worshippers leaving a mosque, witnesses said, in what British prime minister Theresa May described as a “potential terrorist act”.

The Muslim Council of Britain said the vehicle hit people as they were leaving the Finsbury Park Mosque, one of Britain’s largest. The attack comes during the Muslim holy month of Ramzan, when people attend prayers at night.

Two worshippers were feared killed, according to the Sun newspaper, but there was no immediate confirmation of this.

Prime Minister Theresa May said her thoughts were with those injured in “this terrible incident”. The leader of the opposition Labour Party, Jeremy Corbyn, said he was “totally shocked”.

Police said they were called just after 12:20 am (2320 GMT Sunday) to reports of a collision on Seven Sisters Road, which runs through the Finsbury Park area of the city. They said there were a number of casualties and one person had been arrested.

“From the window, I started hearing a lot of yelling and screeching, a lot of chaos outside. … Everybody was shouting: ‘A van’s hit people, a van’s hit people’,” one woman who lives opposite the scene told the BBC.

“There was this white van stopped outside Finsbury Park mosque that seemed to have hit people who were coming out after prayers had finished. I didn’t see the attacker himself, although he seems to have been arrested, but I did see the van.”

A man leapt out of the van and stabbed at least one person, the Evening Standard newspaper reported, citing witnesses. Reuters could not immediately confirm that report.

The incident comes just over two weeks after three Islamist militants drove into pedestrians on London Bridge and stabbed people at nearby restaurants and bars, killing eight.

It also comes at a time of political turmoil, as May plunges into divorce talks with the European Union weakened by the loss of her parliamentary majority in a June 8 election.

She has faced heavy criticism for her response to a fire in a London tower block on Wednesday which killed at least 58 people, and for her record on security after a series of attacks blamed on Islamist militants in recent months.

One witness told CNN it was clear that the attacker at Finsbury Park had deliberately targeted Muslims.

“He tried to kill a lot of people so obviously it’s a terrorist attack. He targeted Muslims this time,” the witness, identified only as Rayan, said.

Other witnesses told Sky television that the van had hit at least 10 people.