Why Is Obama Still Killing Children? 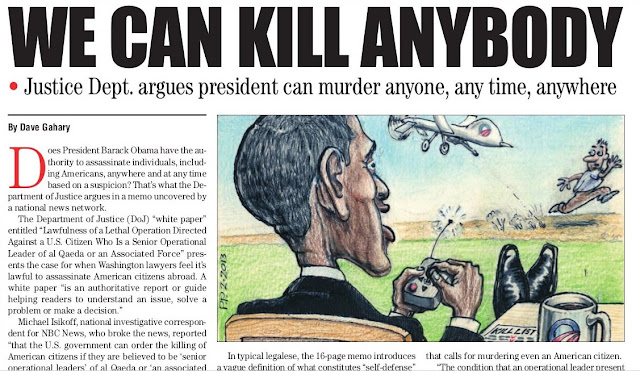 “I pray that my failings are forgiven,” Obama told the audience of spiritual leaders. “I pray that we will see every single child as our own, each worthy of our love and of our compassion. And I pray we answer Scripture’s call to lift up the vulnerable, and to stand up for justice, and ensure that every human being lives in dignity.”

Obama may find that asking for forgiveness is a lot easier than receiving it, at least in this life. Chief among the many things for which this president needs to be forgiven is his expansion of George W. Bush’s drone assassination program. According to reporting by the Bureau of Investigative Journalism, thousands of civilians, including hundreds of children, have fallen victim to his preemptive drones strikes over the last seven years.

One person who will not forgive Obama is Nasser al-Awlaki. He is the grandfather of Abdulrahman al-Awlaki, a 16-year-old American citizen who was summarily executed in a 2011 drone strike as he sat in a cafe in Yemen. Abdulrahman was looking for his father, American citizen Anwar al-Awlaki, who had already been assassinated by Obama two weeks earlier. U.S. officials would later concede that Abdulrahman’s killing was a case of mistaken identity.

“I cannot comprehend how my teenage grandson was killed by a Hellfire missile, how nothing was left of him except small pieces of flesh,” Nasser told Time magazine in October 2011.

“I urge the American people to … expose the hypocrisy of the 2009 Nobel (Peace) Prize laureate. To some, he may be that. To me and my family, he is nothing more than a child killer.”

Obama has tried to disguise his illegal drone program with the patina of legal legitimacy. Perhaps the most horrifying aspect of the drone program — aside from the serial child killing — is the normalization by the U.S. of extrajudicial assassination as an accepted practice under a tortured interpretation of constitutional due process and International law.

Obama first publicly acknowledged the pre-emptive first strike drone program during a May 2013 speech at the National Defense University in Washington, D.C.

“America’s actions are legal,” Obama said. “We were attacked on 9/11. Within a week, Congress overwhelmingly authorized the use of force. … We are at war with an organization that right now would kill as many Americans as they could if we did not stop them first. So this is a just war — a war waged proportionally, in last resort, and in self-defense.”

This argument had previously been rejected by Christof Heyns, the U.N. special rapporteur on extrajudicial killings, summary or arbitrary executions. “It’s difficult to see how any killings carried out in 2012 can be justified as in response to (events) in 2001,” Heyns told a conference in Geneva, Switzerland.