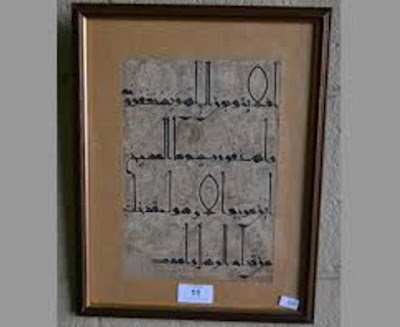 Sydney auctioneer Mark Owens confesses he still knows very little about lot 11, which appears to be a page of the Quran.

"I've never even spoken directly to the person who put it in apart from a couple of e-mails," he said.

"He said it came from an estate in Melbourne. I don't think he knew a great deal about it. How old it is, I still don't know."

Since the weekend sale, half a dozen other people have emailed Owens with photos of their own tattered pages.

"I like to think we're becoming world experts without having any knowledge whatsoever," he laughed.

His auction house, Bargain Hunt Auctions, sells everything from fridges to paintings, many from deceased estates, and mostly for less than $100.

"It was a good win for everyone," he said.