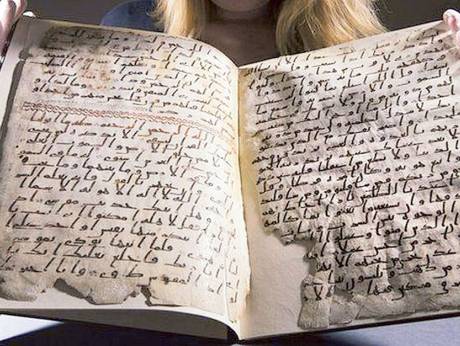 Dubai: A leading UAE scholar has called for more research into the oldest Quranic manuscript found at the University of Birmingham, after new theories have shed light on who could be the likely author.

Jamal Bin Huwaireb, Managing Director of the Mohammad Bin Rashid Al Maktoum Foundation, has become among a select few who have personally studied the Quranic manuscript, which runs into two pages.

Speaking to Gulf News, Bin Huwaireb said radiocarbon analysis dated the parchment with the inscribed text to the period between AD 568 and AD 645 with 95.4 per cent accuracy. This means, he added, that the manuscript was written by someone who was alive close to the time of Prophet Mohammad (PBUH). The Prophet is believed to have lived between AD 570 and AD 632.

“We need to study the handwriting further, as this Quran seems to have been for someone important, and written by a member of upper class society who was also a well-educated person,” said Bin Huwaireb.

The test was carried out in a laboratory at the University of Oxford, which was also responsible for dating the skeletal remains of Richard III.

His theory goes in line with the findings made by Oxford scholars, who have said that the person who wrote this Quran could have well known the Prophet.

Abu Bakr Al Seddiq was the first Caliph from AD 632 to AD 634 and, as one of the companions of the Prophet Mohammad, was said to have heard the Quran recited by the Prophet twice in his lifetime.

“As this is just a theory and some people have argued against these claims, scholars in the Muslim and Arab world should investigate the manuscript further and see it for themselves, before trying to disprove it,” said Bin Huwaireb, commenting on scholars who disputed the claim.

According to the BBC, David Thomas, Birmingham University’s professor of Christianity and Islam, said that the radiocarbon dating was based on the death of the animal whose skin was used for the parchment, not when the writing was completed.

This means the manuscript could be a few years later than the age range ending in AD 645, with Prof. Thomas suggesting possible dates of AD 650 to AD 655. These years could have overlapped with the production of copies of the Quran during the rule of the Caliph Othman between AD 644 and AD 656, which were intended to produce an accurate, standardised version to be sent to Muslim communities.

“Other scholars have also said that the handwriting in the manuscript was not from that age, and that the writing style and grammatical rules were inconsistent with the year it is dated back to. That is why we need to work together, make conferences about it, and learn all that we can from it … Its the most important discovery ever for the Muslim world,” he said.