Israel demolishes only elementary school for Bedouin community in Jerusalem 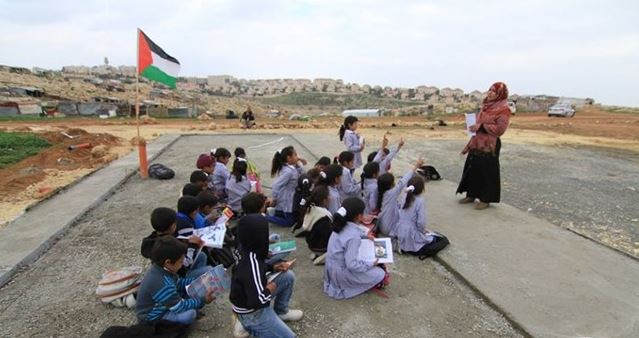 IDF raid homes of Rami Levi supermarket attackers
JPost 20 Feb by Tovah Lazaroff — On Friday, Palestinian sources said the IDF raided the homes of the two 14-year-old boys who carried out Thursday’s stabbing attack at a Rami Levy supermarket, and notified the families of Ayham Sabbah and Omar Al-Rimmawi, who are from the Ramallah suburb of Betunia, that their residences would be demolished. The Palestinian Prisoners Commission said its lawyer, Akram Ajwa, had visited the two boys who are being treated in Israeli hospitals in Jerusalem. Ajwa said the Ofer Military Court is expected to hold a session on Sunday to order the two remanded into custody, but that the boys, who are reported to be in serious but stable condition after being shot during the attack, would not be present.
http://www.jpost.com/Breaking-News/IDF-raid-homes-of-Rami-Levy-supermarket-attackers-445558
Gaza
IOF targets Palestinian farmers in central Gaza
GAZA (PIC) 22 Feb — Israeli Occupation Forces (IOF) stationed at the “Camera” site to the east of Juhr al-Dik town in Central Gaza Strip on Sunday opened its machinegun fire at Palestinian farmers in the town with no casualties reported. The Israeli heavy shooting forced Gazan farmers to leave their farms. The shooting coincided with unusual movement of Israeli forces inside the Gaza border line in addition to intensive flying of drones, according to local sources.
http://english.palinfo.com/site/pages/details.aspx?itemid=76941
7 Palestinians injured during Gaza clashes
GAZA,(PIC) 19 Feb — At least seven Palestinian youths were injured Friday evening after Israeli Occupation Forces (IOF) opened fire at them on the borders of Gaza. A spokesman for the Health Ministry affirmed that four youths were injured [in the] north of Gaza; three of them were shot with live rounds while the fourth suffered a rubber bullet injury. Three other young men suffered live shot injuries in Sheja‘eya neighborhood [in the] east of Gaza.
http://english.palinfo.com/site/pages/details.aspx?itemid=76906
Explosive device detonates in Gaza Strip, no casualties
GAZA (Ma‘an) 21 Feb — An explosive device detonated south of the Gaza Strip overnight Sunday in the southern Gaza Strip without causing injuries, witnesses said. Local sources told Ma‘an that the device exploded in a vacant area in the Talaat Qleibo area, causing no injuries or material damage. Witnesses said no group had claimed responsibility for the explosion. Two days earlier, an explosion targeted the house of Hisham Salim, the secretary-general of the Islamist al-Sabirin movement, in Gaza City, damaging it as well as several neighboring homes.
http://www.maannews.com/Content.aspx?id=770380
Women’s unemployment reaches ‘astronomical’ levels in Gaza, group says
GAZA (Ma‘an) 20 Feb — The unemployment among women in the Gaza Strip has reached more than 60 percent, a women’s organization said on Saturday. Fida Abu Darbi, the executive officer for the Association Of Women’s Work Committees, said the unemployment of women in Gaza had reached “astronomical” levels at 63.3 percent. Abu Darbi’s comments were made during a seminar organized by the association, titled “Unemployment among female graduates” in Beit Lahiya in the northern Gaza Strip. The Association’s head in Gaza, Arij al-Atrash, said unemployment was the biggest issue facing the Palestinian economy in Gaza, as the crippling Israeli blockade on the enclave has severely limited opportunities for job creation. The UN has warned that unless current trends are altered, Gaza could become uninhabitable for residents in just five years.  “The social, health and security-related ramifications of the high population density and overcrowding are among the factors that may render Gaza unlivable by 2020,” the UN’s development agency said last year.
http://www.maannews.com/Content.aspx?id=770376
Attempted smuggling of multicopter drones into Gaza thwarted
Ynet 21 Feb by Yoav Zitun —  Security personnel at the Kerem Shalom border crossing have thwarted, with the help of the Shin Bet, an attempt to smuggle multicopter drones into the Gaza Strip. The Border Authority stopped an Israeli truck transporting a shipment of toys, where it found several multicopter drones with high-quality cameras, which the Shin Bet suspects were meant to be used to gather intelligence on the IDF.
http://www.ynetnews.com/articles/0,7340,L-4768869,00.html