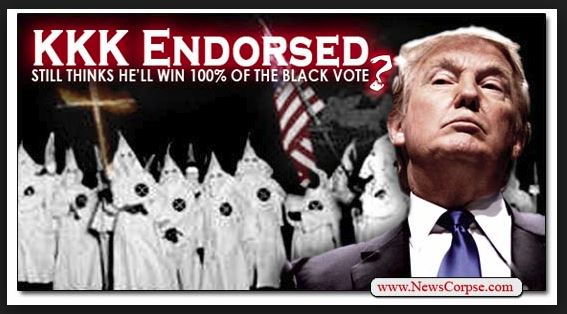 Donald Trump said Monday he didn't disavow the endorsement of former Ku Klux Klan leader David Duke during a CNN interview because of a "lousy earpiece" — an answer that doesn't make much sense.

Appearing on CNN on Sunday, Trump declined to condemn the support of Duke and other white supremacists. He referenced Duke specifically by name.

Honestly, I don't know David Duke. I don't believe I've ever met him. I'm pretty sure I didn't meet him. And I just don't know anything about him.

After the interview, Trump wrote on Twitter that he did in fact disavow Duke. Appearing on NBC's Today show on Monday, he again reiterated his disavowal of Duke's endorsement — this time by blaming CNN for his initial comments:

I'm sitting in a house in Florida with a very bad earpiece that they gave me, and you could hardly hear what he was saying. But what I heard was various groups, and I don't mind disavowing anybody, and I disavowed David Duke and I disavowed him the day before at a major news conference.

It's worth pointing out that Trump's defense doesn't make any sense.

It'd be one thing for Trump to say that he didn't want to disavow a group he hadn't heard of, and that he couldn't make out the name Tapper cited during the interview.

But that's not what happened. If you look at the transcript from his comments on CNN, Trump clearly heard the subject matter at hand — "I don't know David Duke … I just don't know anything about him" — in a way that makes the "earpiece" defense transparently false.

And clearly Trump knows David Duke. Back in August, Trump said he didn't want his endorsement.