Home » War » World » Afghanistan: Are Minerals the Driving Force Behind the War?

Afghanistan: Are Minerals the Driving Force Behind the War? 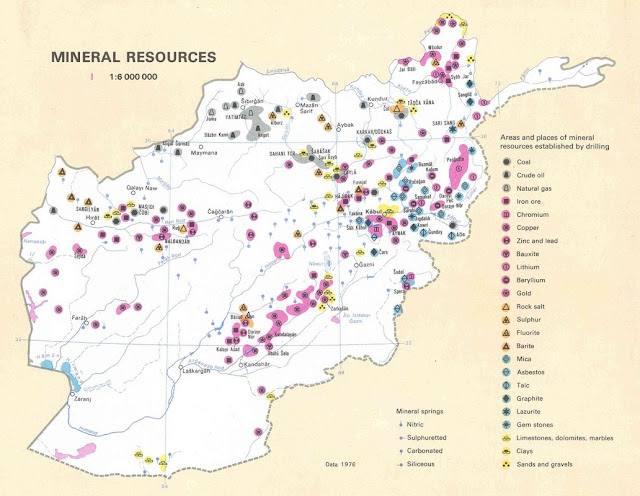 Last December 13th, the leaders of Turkmenistan, Afghanistan, Pakistan, and the vice-president of India met in Turkmenistan; a table with four buttons was set up so each leader could press a button, simultaneously initiating the construction of the TAPI natural gas pipeline. TAPI is the acronym for the four countries involved in the pipeline construction.

This event was big news in south Asia and was covered by all the major newspapers in India, Pakistan, and Afghanistan. It should have been big news in the US too, but except for one paragraph in Foreign Policy online, it seems that the US media ignored the story. Even the Houston Chronicle, the hometown newspaper of the largest US pipeline construction companies, ignored it.

A US State Department spokesman told the Press Trust of India that "The United States congratulates Turkmenistan and its partners on the recent ground-breaking for the construction of the natural gas pipeline to Afghanistan..." Yet, the US media decided that this was news that US citizens did not need to know.

We have been at war in Afghanistan for over 14 years. The preceding sentence answers the first four journalistic questions of who, what, where and when, but it doesn't answer the most important question - why?

Many peace advocates have suspected from the beginning that this natural gas pipeline is one of the ways that the coalition of the greedy expected to profit from this war. But the story that the media promoted continuously after September 11, 2001 was that Afghanistan was just a worthless pile of rocks that had no economic value; therefore, the goal of the war must be to deprive terrorists of a base and, as a bonus, to spread democracy, protect women, and rebuild the country.

In 2010 the New York Times reported on "newly discovered mineral deposits" in Afghanistan. The James Risen article stated that according to US officials "the previously unknown deposits...are so big...that Afghanistan could eventually be transformed into one of the most important mining centers in the world." But news of mineral riches in Afghanistan was not really new.

Since the 1960s, it was reported by the Minerals Yearbook of the US Geological Survey that Afghanistan is rich in natural gas, copper, iron ore, gold, silver, and precious gems. Afghanistan has chromite that hardens steel. It has barite that is used in oil well "drilling fluid." The 1963 entry on Afghanistan in the Minerals Yearbook says "known natural gas reserves are substantial and have potential significance." The 1982 entry reports about the Hajigak iron ore deposit that "a 1977 independent survey concluded that the deposit was large enough and of a sufficient grade to support a major iron and steel industry."

This knowledge should have served as the starting point for reporters seeking background on Afghanistan after the attacks of September 11, 2001. But reporters must have asked the wrong people for information. They consistently reported that Afghanistan had no economic value aside from pistachios, pomegranates, goats, and sheep.

Against this tide of misinformation a few brave souls tried to tell the true story to the American people. In an opinion column in the New York Times in November 2001 Ishaq Nadiri, a professor of economics at New York University, wrote that Afghanistan "...once exported natural gas to the Soviet Union. It has large reserves of copper and high-grade iron ore."

In a December 2001 column in the Christian Science Monitor, John F. Shroder, Jr., a professor of geology at the University of Nebraska, said that he had studied the natural resources of Afghanistan for decades and that it had "what may be the world's largest copper deposit and the third-largest deposit of high-grade iron ore, in addition to reserves of gas, oil, coal, precious stones." Professor Shroder said that several American companies had called him "to find out more about the prospects for post-war mining and hydrocarbon acquisition."

This news might lead a careful reader to question the nobility of our motives in Afghanistan, but the day after Professor Shroder's column appeared, the New York Times rode into town to put the kibosh on any growing suspicion. In its usual inconclusive way, the Times both denied and confirmed that there might be something interesting going on. The first sentence of their article said that, "There is no oil in Afghanistan, but there are oil politics" But later the article says, "Oil companies and regional experts wonder whether significant new oil and gas reservoirs will be opened to foreign investment," a reference to oil and gas reserves north of Afghanistan in Turkmenistan, Uzbekistan, and Kazakhstan.

Aside from the TAPI pipeline there are many opportunities for the coalition of the greedy to make a killing, so to speak. Selling weapons to both sides, opium smuggling, and overcharging for shoddy construction and useless consulting fees are just a few examples, but stealing minerals may be the driving force that makes the war continue.

President Karzai of Afghanistan was once called paranoid by the New York Times because he said the goal of US policy was to weaken his country, not to strengthen it. But just look at what we've done. Under US guidance, Afghanistan, year after year, slipped down the Transparency International corruption index until it is now tied for second most corrupt nation on earth.

The October 2015 report from the Special Inspector General for Afghanistan Reconstruction shows that over 99% of our tax spending in Afghanistan has gone to military spending or supporting a corrupt government. Less than 1% has gone tor food, clothing, and shelter for some of the poorest people on earth, the Afghans, now suffering through their 38th year of war. What better way to steal the mineral wealth of Afghanistan than to create a weakened government and a starving people?

The Reverend Dr. Martin Luther King, Jr., in his brilliant "Beyond Vietnam" speech at Riverside Church in 1967 said that an important reason for forming the Southern Christian Leadership Conference and for speaking out against the Vietnam War was "To save the soul of America." If we are going to save the soul of America and bring relief to our suffering sisters and brothers in Afghanistan and in all the wars we are involved in, then our nation must stop being a leader in war and become a leader in peace.