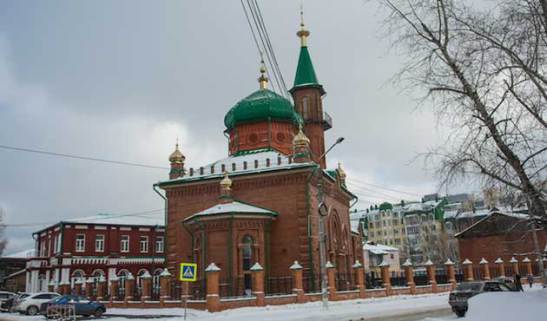 MOSCOW April 2015:  Closed 90 years ago, Russia’s Red Juma mosque has finally opened its doors to worshipers, ending a dark history in which it was turned into a cinema and then a restaurant that served alcohol.

To the delight of the Muslim community, the ceremony was also attended by numerous representatives of the Islamic community as well as hundreds of Muslims that were part of the congregation.


The ceremony, held last Friday, was opened by Tomsk Regional Imam Ozotmutdin Umayev with a recitation from the Qur’an, and was followed by a speech from Sheikh Nafigullah Ahsyrov who thanked the attendees.

Governor Jvachkin thanked the Tomsk community for assisting with the renovations and also thanked the Chechen Republic leader Ramzan Kadirov.

The Russian Governor pointed out how the restoration of the mosque beautified the entire city.

Red Mosque was founded in 1901 on the site of the first two wooden mosques, which were destroyed by fire. The construction of the mosque was completed in 1904, thanks to generous donations from the local Muslims.

In the late 1920s, the mosque was closed, and was converted into cinema hall and then a distillery. During that time, the building was almost completely damaged.

The mosque had no minaret and dome, and only in 2002 the building was returned to Muslims.

Islam is the country's second-largest religion, behind the Russian Orthodoxy.

There are some 23 million Muslims in the Russian Federation concentrated in the north of the Caucasus, representing roughly 15 percent of its 145 million population.

According to Russia Today, experts say that, by 2050, Muslims will make up about half of Russia's population, making it one of the world’s largest countries.