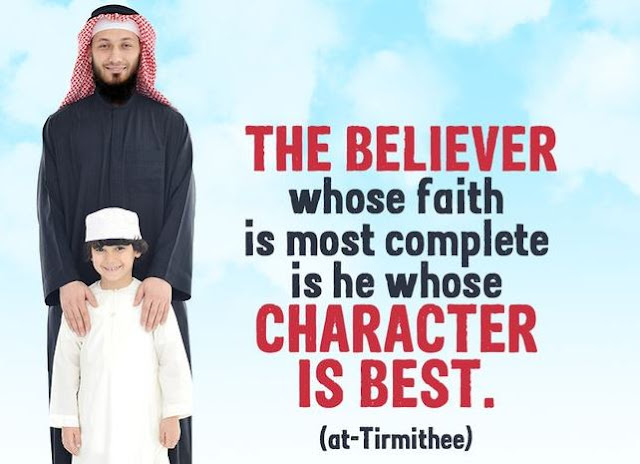 All praise is due to Allah, the Beneficent, the Merciful. May peace and blessings be upon our Prophet Muhammad, his family and companions.

Brothers in faith! Fear Allah, obey Him and beware of His punishment.

Fellow Muslims! One of the goals of Islam is the establishment and fulfilment of Allah’s rights on man, and the rights of man on his fellow human beings. Allah says,

“Worship Allah and join not with Him in worship, and do good to parents, kinsfolk, orphans, the poor, the neighbor who is near of kin, the neighbor who is a stranger, the companion by your side, the wayfarer (you meet), and those (slaves) whom your right hand possesses. Verily, Allah does not like such as are proud and boastful.”   (An-Nisaa’ 4: 36)


Whatever people may do beside the above goal – like living our day to day lives on the earth, upholding the law and abstaining from injustice, etc. are only secondary obligations and a means to achieve the first and primary goal.

Good conduct is the foundation for the fulfilment of one’s obligations to Allah and to other human beings. Good conduct increases one in rank and erases one’s misdeeds. Aa’ishah related that she heard the Prophet (s.a.w.s.)  saying, “A Mu’min (believer) achieves by his good conduct the reward of a person who fasts much and prays in the night.” (Aboo Dawood)

The Prophet (s.a.w.s.)  also said, “Nothing is weightier on the scale of a believing slave (of Allah) on the Day of Resurrection than good conduct and indeed, Allah dislikes the rude and disrespectful.” (At-Tirmidhee)

Good conduct includes all commendable characteristics and all other things which, according to Islamic Law and sound reason, are good. Some scholars say: “Good conduct is to spread all that is good and abstain from all that is evil.” Good conduct means performing all that Allah enjoins and abstaining from all that He forbids. One should try to be pious, sincere, patient, forbearing, modest, deliberate, decent, dutiful to one’s parents, kind to the kith and kin, passionate, courageous, generous, truthful, and gentle, enjoin good, forbid evil, have good neighborliness, humbleness and tolerance; and abstain from trickery, betrayal, immodesty, disgraceful behavior, consuming unlawful food and drink, lying, slandering, miserliness, cowardliness, showing-off and self-glorification.

Good conduct benefits a believer in this life and the next, and increases him in rank before his Rabb. Both good and bad people benefit from their good conduct. As for the kaafir, his good conduct only benefits him in this world and Allah rewards him for it here and on the Last Day he will have no share. Aa’ishah narrated that she said, “O Messenger of Allah! What do you think about Abdullah bin Jad’aan? For he took care of guests, fended for the destitute and assisted people in difficulties, will all this be of any use to him (in the hereafter)?” The Prophet (s.a.w.s.)  answered, “No, for he has never once said, ‘My Rabb! Forgive me my sins on the Day of Reckoning.”

Brothers in Islam! Allah enjoins in his Great Book all noble characteristics and forbids all distasteful ones. The Sunnah also enjoins good conduct and forbids filthy behavior.

“Come not near to shameful sins, whether committed openly or secretly.” (Al-An’aam 6: 151)

“Show forgiveness, enjoin what is good and turn away from the ignorant.” (Al-A’raaf 7: 199)

“The good deed and the evil one cannot be equal. Repel (the evil) with one which is better (i.e. Allah ordered the faithful believers to be patient at the time of anger, and to excuse those who treated them badly), then, verily, he between whom he and you was enmity, (will become) as though he was a close friend.” (Fussilat 41: 34)

“And lower your wings to the believers (be courteous to the fellow believer).” (Al-Hijr 15: 88)

“And the slaves of the Most Beneficent (Allah) are those who walk on the earth in humility and sedateness, and when the foolish address them, they reply with mild words of gentleness. And those who spend the night before their Rabb, prostrating and standing. And those who say, ‘Our Rabb! Avert from us the torment of Hell. Verily, it’s torment is ever an inseparable permanent punishment. Evil indeed it is as an abode and a place to dwell. And those who when they spend are neither extravagant nor niggardly, but hold a medium (way) between those (extremes). And those who invoke not any other god along with Allah, nor take such life as Allah has forbidden, except for justice, nor commit illegal sexual intercourse.” (Al-Furqan 25: 63-68)

In the Sunnah, the Prophet (s.a.w.s.)  said, “I am a guarantor of a home in the upper part of Paradise for whomsoever possesses good conduct.”   (Abo Dawood)

Aa’ishah narrated that the Prophet (s.a.w.s.)  said, “Gentleness does not but adorn one’s deeds and when something is devoid of gentleness, becomes disfigured.”   (Muslim)

Nawwaas bin Sam’aan said, “I asked the Messenger of Allah about righteousness and sin and he replied, ‘Righteousness is good conduct and sin is something that is deeply rooted in your heart of which you would not like anybody to know.” (Muslim)

Good conduct is a blessing for a man and for his community. It means progress, a high position in front of Allah and it makes one loved by people. It gives peace of mind, easiness in one’s affairs, and earns people’s praise and, ultimately, success on the Last Day.

Bad conduct on the other hand brings curses, removal of blessing, peoples hatred, darkness in the grave, and misery in this world and the hereafter.

Fellow Muslims! Emulate the righteous predecessors who possessed noble characters of which Allah attests to in His Book when He says,

“Muhammad is the Messenger of Allah, and those who are with him are severe against disbelievers and merciful  among themselves. You see them bowing and falling down prostrate (in prayer) seeking bounty from Allah and (His) good pleasure.” (Al-Fath 48: 29)

He also addressed them thus:

“You (true believers in Islamic Monotheism and real followers of Prophet  Muhammad,s.a.w.s.) are the best people ever raised up from mankind; you enjoin all that is good and forbid all that is evil and you believe in Allah.” (Aal-‘Imraan 3: 110)

He also says about them,

“Among the believers are men who have been true to their covenant with Allah, of them some have fulfilled their obligations and some of them are still waiting, but they never changed in the least.” (Al-Ahzaab 33: 23)

“Indeed in the Messenger of Allah you have a good example to follow for him who hopes in (the meeting with) Allah and the Last Day and remembers Allah much.”   (Al-Ahzaab 33: 21)

His Rabb has refined him in the best possible form and he in turn exerted great effort to reform his ummah and bring them up with commendable characters and guidance. He said, “I am only sent to bring good conduct to perfection.” (Ahmad)

Allah also praises His Prophet (s.a.w.s.) greatly when He says,

Once, Aa’ishah (r.a.) was asked of the character of the Prophet (s.a.w.s.),  she replied, “The Qur’aan was his character.” While commenting on this hadeeth, Ibn Katheer said, “(That means) that abiding by the injunctions of the Qur’aan in terms of what it enjoins and forbids had become his behavior and accustomed character. Whatever the Qur’an enjoined on him, he did it and whatever it forbade him from, he abstained from it.” He was naturally disposed to generosity, courage, forbearance and forgiveness and all beautiful conduct.”

Even before he was commissioned a Prophet (s.a.w.s.),  no fault was recorded against him nor defect. When revelation first came to him, he told his wife Khadijah: “I fear for myself.” Khadijah replied, “No! By Allah! Allah will never disgrace you; for you are kind to the kith and kin, you tell only the truth, you are patient, take care of guests and assist others upon the truth.”   (Al-Bukhaaree & Muslim).

The above are only some of the exemplary qualities he possessed before he was commissioned as a Prophet.  Then Allah completed His favour upon him and increased him in these qualities after he was made a Prophet.  Therefore emulate him, dear Muslims, by adhering to your religion firmly and implementing his Sharee’ah and taking after him in good conduct as much as Allah will permit you. Follow his path and Sunnah with all sincerity and without innovating anything in the religion. Allah says,

“Say (O Muhammad to mankind): If you really love Allah, then follow me; Allah will love you and forgive you your sins. And Allah is Oft-Forgiving, Most Merciful.” (Aal-‘Imraan 3: 31)

Fellow Muslim! Be aware that the prevention of evil through a good word or deed and the spreading of the Truth with tact and understanding are good, commendable acts. Conversely, cowardly acts of flattery and sycophancy such as refusal to speak out the truth or turning a blind eye to, or even expressly approving of sinful acts is a grave misconduct. Allah says,

“O you who believe! Bow down and prostrate yourselves and worship your Rabb and do good that you may be successful.” (Al-Hajj 22: 77)

Brothers in faith! Fear Allah as He should be feared and abstain from all that He forbids. He commands you thus:

“Verily, Allah enjoins justice and Al-Ihsaan [i.e. to be patient in performing your duties to Allah, totally for Allah’s sake and in accordance with the Sunnah of the Prophet (s.a.w.s.)]; giving help to kith and kin; and forbids all evil deeds, all that is prohibited by Islam’s Law and all kinds of oppression. He admonishes you that you may take heed.” (An-Nahl 16: 90)

This verse encompasses all noble qualities and prohibits all ugly characters.

Mu’aadh bin Jabal narrated that the Prophet (s.a.w.s.)  said, “Fear Allah wherever you are, follow up an evil deed with a good one - it will erase it - and treat people with good conduct.” (At-Tirmidhee)

Dear Muslims! Hold fast to the qualities enjoined by your religion and keep to the path of your Prophet (s.a.w.s.) that you may prosper in this life and the hereafter.